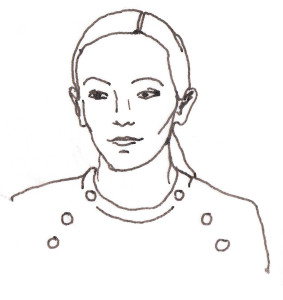 As a member of the NEUER TANZ company under the direction of the visual artist and photographer V.A.Wölfl. she was involved in the artistic process and the creation of choir (e) ographies, performances and lecture performances. She was a rehearsal leader and teaching dance. For the work „12/…im linken Rückspiegel auf dem Parkplatz von Woolworth/MITTELALTER EDITION“ performed at the RuhrTriennale 2007, she developed DOWNTOWN, a WBILD improvisation on video, realized in NYC and presented at the Jour Fix of the Marstall Schloss Benrath in Düsseldorf.

She has been shown at more than 25 festivals a. A .: RuhrTriennale, Tanzplattform Deutschland, Recontres Choreographiques Internationales de Seine-Saint-Denis in Bagnolet, Schouwburg in Rotterdam, Jade Festival in Tokyo and Festival International Buenos Aires Danza Contemporánea

In 2016 she was resident of La caldera les Corts – center de creació de dansa i arts escèniques in Barcelona, ​​where she researched the perception of movement.

In her dance installation THINK (2016) “the transformation processes from seeing to hearing and vice versa (…) seem like something that one has been involved in for a long time.” (Lisa Leopold, tanznetz). The dance story UNFORGETTABLE (2018) is “an evening about history and stories, about Argentina and Germany – and about unforgettable memories (…) an evening that resembles a successful documentary.” (Katrin Ullman, taz). DANCE FOREVER, the last part of their trilogy about the traces of movement, premiered on March 14th, 2019 in the Lichthof Theater.

Her experimental formats in the form of dance installations, dance stories, installative choreographies, durational performances, art actions and concerts were presented in a wide variety of contexts in Denmark, Spain, Austria, Luxembourg, Argentina and Germany.

Since 2005 she has been performing KUNSTAKT / ONEN and WBILD improvisations. In 2008 she presented the video documentation of KUNSTAKT / ON 9 in Buenos Aires, realized in Tokyo, NYC, Bs.As., Essen, Cologne and London. This was also the origin of the interactive performance of the same name, performed in the Forum Art & Architecture as part of the Essen Culture Path Festival 2011.

As a co-founder of the art collective WIR LIEGEN AUF EINER WIESE UND HÖREN DEN INSEKTEN ZU BÜRO, she realized the site specific performances EXTREM EPHEMERE (developed in and for the Hotel Beethoven in Bonn, before its demolition) and HOME IMPROVEMENT (developed in private apartments in Cologne).

She has worked internationally as a dancer and performer in more than 40 projects with choreographers such as Isabelle Schad, Joachim Schlömer, Rodolfo Leoni, Samir Akika, as well as the directors Peter Siefert and Rahim Burhan, the musicians Sven Hermann, Matthias Hettmer / Interzone Perceptible and the and artists Guillermo Roux and Iris Hoppe.

She teaches body and improvisation work and is a yoga teacher certified according to the guidelines of the Federal Association for Yoga Teachers in Germany and the European Yoga Union (BDY / EYU).

She work in Hamburg since 2014. In 2019 she took over the direction of the K3 youth club of K3 I Center for Choreography I Tanzplan Hamburg.